The Alligator Snapping Turtle is the largest fresh water turtle in all of North America. They are found from eastern Texas east to the Florida panhandle, and north to southeastern Kansas, Missouri, southeastern Iowa, wester Illinois, southern Indiana, western Kentucky, and eastern Tennessee. This is such a vast area to live in, yet these animals are endangered. Their decline can be attributed to the age of which they reproduce, habitat distruction, and pressure from being over hunted until the late 60’s. Now, as a direct result of students, the Alligator Snapping Turtle has a chance for a rebound off of the endangered species list.  Due to Operation Endangered Species, classrooms throughout the State of Illinois are now going to be raising juvenile ASTs and then releasing them back to their historic watershed.

Alligator snapping turtles are oppurtunistic omnivores, more at a young age. These turtles are also scavengers. Their natural diet consists primarily of fish and dead fish carcasses (usually thrown overboard by fishermen), invertebrates, carrion, and amphibians, but they are also known to eat snakes, and even other turtles. Now when in captivity they eat any thing really. They will eat poultry, chicken, and beef. They will even eat an alligator if stuck with one in a net, bog, or a poorly prepared aquarium.

Their maturity is normally reached once they turn 12 years of age. Their actual life span in the wild is really unknown. But in popular belief they can live up to 200 years! Although 80 to 120 years is more likely, but you never know it could be way higher and they could live to those full 200 years. Now in captivity the numbers are a little lower then their wild lives. Their lifespan in captivity is anywhere from 20 to 70 years old. 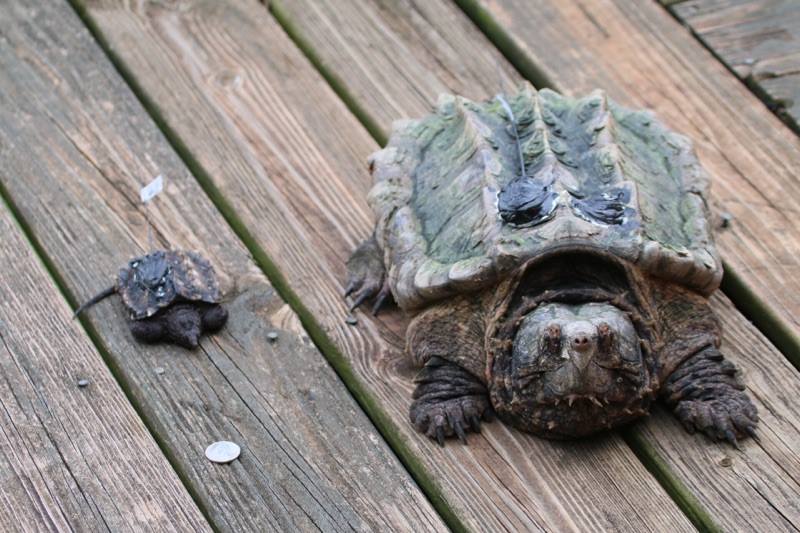